The Porter Complication by Mike Ryan 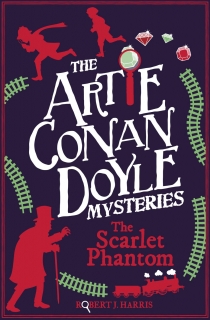 One day Arthur Conan Doyle will create the greatest detective of all — Sherlock Holmes. But right now, Artie Conan Doyle is a twelve-year-old Edinburgh schoolboy with a mystery of his own to solve.

Artie and his best friend Ham are investigating the strange case of the Scarlet Phantom, an invisible jewel thief who seems to walk through walls and disappear at will. But there’s a rival detective on the case, a paranormal investigator who claims that only he can capture this ‘ghost’.

With the help of their new friend, girl scientist Peril Abernethy, Artie and Ham follow a trail of baffling clues and impossible dangers, but can they catch the Phantom before the invisible fiend pulls off the greatest robbery in history?