The Portable Nine by Pete Mesling 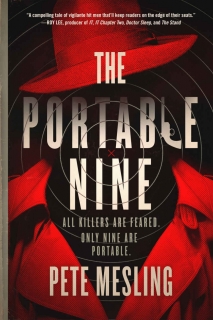 Meet Davenport, also known as the Mad Marksman of Malta. He is a hunter. Not of game or fowl, but of men. What he hunts he finds, and what he finds he exterminates—until his trusty revolver fails him at a crucial moment in Italy, that is, leaving a job unfinished and his resolve shaken. Mistakenly thinking the blow has been struck, a criminal mastermind known as the Black Phantom performs a cruel act of retaliation. The once and would-be assassin has no choice but to reunite with a storied band of skilled mercenaries in an effort to exact revenge.

Davenport. Abel Hazard. Miranda Gissing. Dr. Joseph Intaglio. Mr. Bonnet. Twitch Markham. The Butcher. Lovinia Dulcet. Robin Varnesse. These are the Portable Nine. They operate outside the law, but they are not without a code of ethics. Outcasts all, they are heroes to the underdog and enemies of the ruthless. Intelligent and fearless, they will stop at nothing to see that their brand of justice is meted out.