The Poison Prince by S.C. Emmett 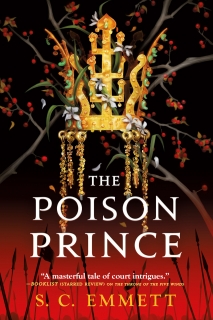 The lady-in-waiting to the princess of a conquered kingdom must navigate a treacherous imperial court, in the second book in a medieval East Asia-inspired epic fantasy trilogy.

The crown princess has been assassinated, reigniting tensions between her native Khir and the great Zhaon empire. Now her lady-in-waiting, Komor Yala, is alone in a foreign court, a pawn for imperial schemes. To survive and avenge her princess, Yala will have to rely on unlikely allies — the sly Third Prince and the war-hardened general who sacked her homeland.

But as the Emperor lies upon his deathbed, the palace is more dangerous than ever before — for there are six princes, and only one throne.