The Playing Fields by Stella Cameron 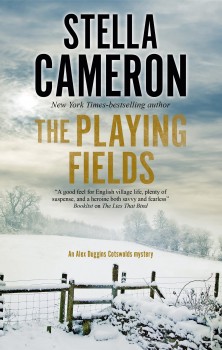 When two bodies are discovered within six weeks of one another, it would appear that a serial killer is at large in the sleepy Cotswold village of Folly.

Six weeks after a battered body is found in the grounds of the village cricket club, DCI Dan O’Reilly and his team are no further forward in the investigation. No witnesses, no leads, no clues whatsoever. Then a second body is discovered in the nearby tithe barn used by the local amateur dramatics society, artfully posed just like the first. Could there be a serial killer on the loose?

When evidence leads O’Reilly to visit the Black Dog pub, owner Alex Duggins and her partner Tony are once again drawn into a police investigation.

But Tony is dealing with some disturbing news of his own. Someone from his past has reached out and threatens all he holds dear. Are they who they claim to be, and what do they really want . . .?