The Piggy Farmer by Emmy Ellis 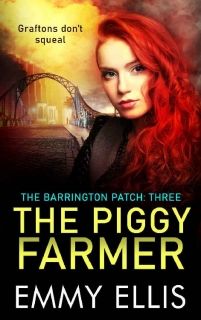 Cassie finishes a gangland job, then another slaps her in the face. It’s a well dodgy one—the police are involved, and that’s something she always avoids. The trouble is, when Mam’s on board as well as an old family friend, Cassie can’t say no. She steps into dangerous territory, hoping she can keep murder under the radar…

Jason is living a nightmare, one he can’t escape. His plan to take over the Barrington hasn’t panned out yet, and he’s trapped in the squat with Jimmy Lews, Cassie’s new spy. There’s no way out—unless Jason can convince the boss he’s loyal, something she doesn’t believe he is.

With coppers in Cassie’s crosshairs and a new weapon in a gloved fist, it may only be a matter of time before she’s caught red-handed and everything comes tumbling down. She struggles to accept who she’s turned into since taking over the patch—and how she’s enabling The Piggy Farmer.

The estate is awash with crime, a trio of women committing it: Cassie, Mam, and a demented sidekick. But as the snow melts, so does the new job, and just when Cassie thinks she can have some downtime, life on the Barrington takes yet another sinister turn…