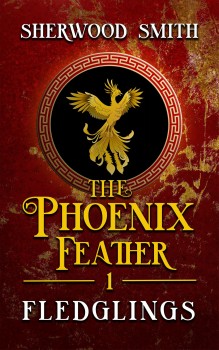 In the grand tradition of martial arts fantasies, The Phoenix Feather begins twenty-five yearsafter a pair of lovers ran for their lives from an angry prince and washed up on an island where they adopted new identities—and found themselves blessed by an omen promising great things, a single golden phoenix feather.

Their eldest child, a natural martial artist like his father, seems destined for those great things. The second son, an artist and a dreamer, has no desire for greatness—he wants to be left alone to paint. And the youngest, a daughter, used to wearing her brothers’ castoffs and trotting at their heels, is the least promising, always scamping her studies in favor of sword lessons and play.

All three vowed to keep their parents’ dangerous secret. But in this first volume, Fledglings, the family learns that sometimes children must follow their own paths . .