The Perfect Father by Nenny May 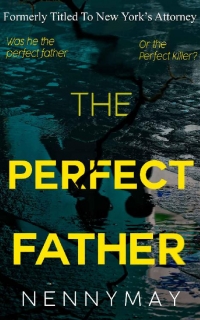 Was he the perfect father, Or the Perfect killer?
Ten years ago, Terrence Gresham was arrested and tried for murder. The charges had been dismissed for a want of evidence.
Ten years later with a murder brewing at his office dwelling, all fingers point to Terrence and Christina Gresham is the only one willing to save his case.
How well Do You know your father?

Christina Gresham is officially in Lawyers’ hell. Just when she thought she’d escaped the past, it found her. That same ugly past that believed her father had murdered her twin brother.
Riddled with doubt, Christina Gresham finds herself delving deeper into Terrence’s arrest ten-years ago, not expecting to find the bitter truth that made her blood run cold.
What Lines are you willing to cross for family?

With her health rapidly deteriorating, Christina Gresham can’t afford a prolonged trial and entangles herself in a forbidden affair with Detective Harrington, because, she would die before she letting her sixty-something-year-old father serve time for a murder he probably didn’t commit.