The Payoff by Lynne Cantwell 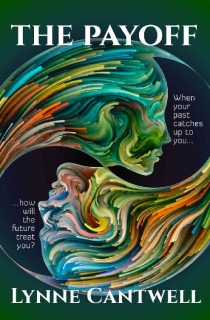 Choices have consequences…
Janis Fowler and Jan Marek grew up together, the only two students at the Institute, a research facility and school for children with paranormal abilities. Or so their parents were told. In reality, the Institute’s director, Dr. Denise Tandy, had her own plans for their talents – Janis can read a person’s past and Jan can see a person’s future – and when the kids resisted her, she was ruthless at getting them to comply.

At last, Janis and Jan escaped – and split up, knowing it was the only way to protect both themselves and each other. But they knew they would reunite someday, when the time was right.

Forty years later, the time has come. Their old tormentor has turned up again. Her game is the same, but her newest ruse is more dangerous than ever. And she’s recruiting more victims.

Jan and Janis must use their powers to put an end to Dr. Tandy’s vile scheming – without risking each other. It’s a tall order for two people who have been hiding in plain sight for four decades. But with age comes wisdom. And they have waited long enough to see justice served.