The Path Of Water by Franklin Horton 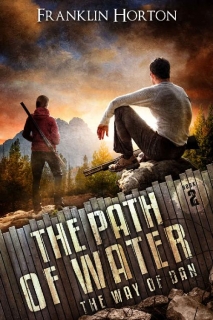 After an EMP strands Dan in Boise, he escapes to the Idaho mountains with his new friend, Holly. She’s not entirely sure what she’s gotten herself into. She’s straight-laced, pragmatic, and comes from a law enforcement background. Dan is a vigilante who thinks murder is sometimes the best solution to a problem. He’s also a weed-smoking drinker who’s constantly spouting his personal philosophy, The Way of Dan. Somehow the two of them have to find a way to survive together in the close quarters of their isolated cabin.

All seems idyllic at first. Everyone they meet in their new community is kind and helpful. It’s almost too good to be true, like they’ve each found a better life in the midst of this crisis than the one they had before. Dan and Holly spend their evenings sitting in a mountain hot spring with their new friends, drinking up the inventory of the local brewery and laughing into the night.

One charismatic neighbor in particular charms Dan with his larger-than-life personality, but his intensity concerns Holly. Does he have ulterior motives or is she just being suspicious? After all, everyone has their secrets, including Dan and Holly, but in such a tight-knit community can a secret stay buried forever?