The Paris Collaborator by A.W. Hammond 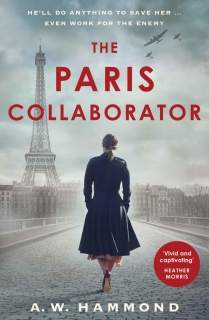 August, 1944.
In German-occupied Paris, former schoolteacher Auguste Duchene has stumbled upon an unusual way to survive – he finds missing people.
When he’s approached by the French Resistance to locate a missing priest – and a cache of stolen weapons – Duchene initially refuses.
But the Resistance offer him no choice.
Within hours, he’s also blackmailed by a powerful Nazi into searching for a German soldier who’s suspected of deserting.

To fail at either task will have deadly consequences for Duchene – and for his daughter Marienne.

So begins a frantic race against time.
As forces close in on Paris, Duchene has only 48 hours to locate the missing priest and soldier, or lose the only person he loves . . . .