The Oslo Affair by CW Browning 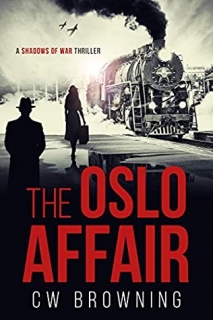 As Europe reels from the Nazi’s defeat of Poland, a young woman is thrust into war – and into the crosshairs of a Soviet agent.

Evelyn Ainsworth is just coming to terms with the sudden death of her father when an unexpected meeting in London exposes family secrets, changing everything she thought she knew. Faced with the task of traveling to Oslo to meet with a double agent, it’s time for the new MI6 agent to show her worth. But nothing can prepare her for what awaits her in the streets of Norway.

Caught between a ruthless SS agent and the Soviet NKVD, Evelyn races to stay one step ahead of an enemy who seems to know her every move. And as she navigates through the complex web of the intelligence underworld, one thing becomes alarmingly clear: the war is just beginning.

And someone is determined to keep her out of it.