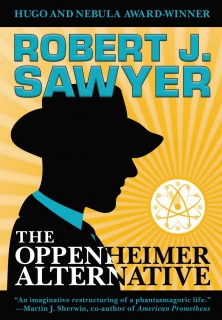 While J. Robert Oppenheimer and his Manhattan Project team struggle to develop the A-bomb, Edward Teller wants something even more devastating: a bomb based on nuclear fusion – the mechanism that powers the sun. But Teller’s research leads to a terrifying discovery: by the year 2030, the sun will eject its outermost layer, destroying the entire inner solar system – including Earth.

After the war ends, Oppenheimer’s team plus Albert Einstein and Wernher von Braun stay together – the greatest scientific geniuses from the last century racing against time to save our future.

Meticulously researched and replete with real-life characters and events, The Oppenheimer Alternative is a breathtaking adventure through both real and alternate history.