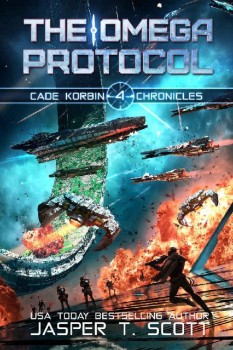 CHAOS IS COMING…
After defeating Nadine Zabelle and tricking her into paying him a handsome sum, Cade Korbin finally has more credits than he knows how to spend. In addition, he has the alien entity known as Alpha and the power of the swarm on his side. Finally, things are going his way.
Cade decides to leverage his good fortune to start his own guild: the Templar, dedicated to hunting the galaxy’s crime lords and all of the corrupt authorities that shelter them.
But meanwhile, tensions are simmering along the border between the Alliance and the Coalition. A cease fire was declared, but both sides are bitterly licking their wounds.

Cade learns of a dangerous operation, code-named “The Omega Protocol”, which entails using the Priors’ Gateway to travel to the future and bring back a weapon that could win the war.
Having used the Gateway before, Cade knows that time travel is like a snake eating its own tail, and Alpha has already warned him that there is another entity like him lurking in the future, one whose only goal is to cause chaos and destruction.
In order to stop The Omega Protocol, Cade must cut a deal with the very enemies he sought to eradicate. Together, they must destroy the Gateway before it can be used to usher in a dark age the likes of which the galaxy hasn’t seen since the Priors mysteriously disappeared.

Other People’s Pets by R.L. Maizes