The Note by Kim Knight 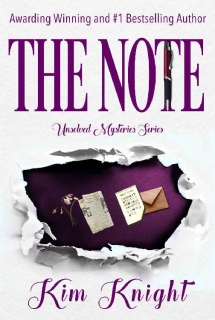 Everyone has a motive for murder when there’s money on the table. But whose story is more plausible?
In seventy-two hours, Detectives Idris Dunne and Josh McDonald close in on an unsolved murder case with the help of mysterious notes.
One of London’s wealthy entrepreneurs was diagnosed with cancer, and became estranged from his wife of thirty years Manisha. Unknown to her, his mistress Chelsea Jackson was slowly sinking her claws into her husband. But that’s not all his mistress was up to. Unexpectedly Tony’s mutilated body is found dumped in a park. Everyone has a motive especially when money is on the table, and his wife Manisha, and their adult children were cut out of his will and replaced by his mistress Chelsea.

Was this an act of kindness from Tony, toward his carer and mistress? Or was there foul play and pressure to change his will by Chelsea? What about his murderer? The case was left unsolved, with lack of evidence.
Mystery notes are sent by an anonymous tip off, Detective Dunne and McDonald re-investigate and piece together the mystery surrounding the entrepreneur’s death, and what led him to change his Last Will in Testament. The question is, from all suspects whose story is more plausible?