The Noble Murder by Emmy Ellis 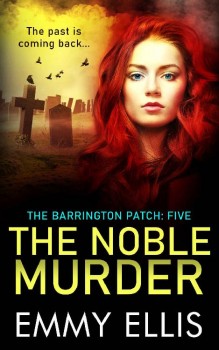 Cassie is on a mission to find out who has the guts to carry a gun on her patch—and who the killer is. It’s personal, and she won’t rest until she’s caught the piece of scum and sent him to Marlene.
The thing is, as usual, the past plays a big part, and she has to unravel the murky depths of days gone by in order to come out on top. It hurts, it’s too painful even for her, a woman people think has no heart, but she does, and it’s just about breaking in two.

With Jimmy by her side as her wingman, Cassie not only learns a lot about herself but also her mother, a woman she thought she knew so well.
Why did The Mystic cast a spell?
What will that knowledge do to Cassie?
And to put the icing on an already frustrating cake, what is Michelle Forster up to, and why is Dawn Cottrill planning to put on a balaclava?
The Barrington never rests, and even if secrets are dormant, they don’t stay that way for long. Skeletons always creep out eventually…