The New Friend by Alex Kane 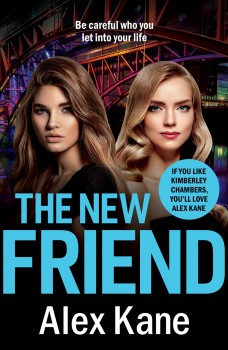 Be careful who you let into your life.

Arabella MacQueen had a tough start. Growing up surrounded by drugs and alcohol, getting into trouble as a teen, she’s now in her late-twenties and has turned her life around.
Until the fateful night that sees her imprisoned for 10 months. She’s hit rock bottom … but unexpectedly forges a bond with cellmate Roxanne McPhail that lasts beyond the prison walls. Now both women are free, and Arabella is excited about the future with boyfriend Eddie, with Roxanne at her side.
But Arabella doesn’t know the truth about her new best friend; about Roxanne’s reputation as the head of Glasgow gangland, about the violence in Roxanne’s past. She doesn’t know that Roxanne has plans for Arabella that might lead her into some very dangerous places.

In this dirty game, Arabella is going to have to learn you can’t always trust those closest to you…