The Moscow Whisper by Michael Jenkins 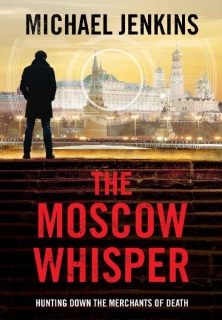 ‘Sometimes you have to enter the death zone to save the innocent.’
A top-secret clique of former spies meet for dinner to hatch a plan to murder a competitor, not knowing that they are under surveillance from a covert arm of British Intelligence. Hours later, with bodies strewn across a terrace, a piece of secret intelligence reveals an international plot of colossal magnitude.
For disgraced agent Sean Richardson, this is the beginning of a deniable mission to infiltrate and disrupt a group of Russian mercenaries who are working clandestinely to take over a nation state.
Acting covertly as an illicit arms trafficker, Sean is dropped into a deadly cauldron of terrorism and high-tech weaponry that will take a nation down. As the bullets fly and the chaos rains in, can Sean take down the merchants of death…or has he finally met his match?