The Moorland Murderers by Michael Jecks 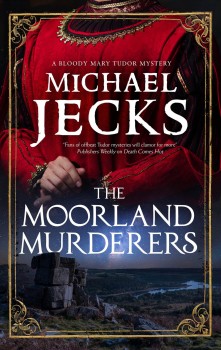 Londoner Jack Blackjack finds himself a stranger in a strange land when he’s accused of murder in rural Devon in this eventful Tudor mystery.

July, 1556. En route to France and escape from Queen Mary’s men, Jack Blackjack decides to spend the night at a Devon tavern, agrees to a game of dice – and ends up accused of murder. To make matters worse, the dead man turns out to have been the leader of the all-powerful miners who rule the surrounding moors – and they have no intention of waiting for the official court verdict to determine Jack’s guilt.

But who would frame Jack for murder . . . and why? Alone and friendless in a lawless land of cut-throats, outlaws and thieves, Jack realizes that the only way to clear his name – and save his skin – is to unmask the real killer. But knowing nothing of the local ways and customs, how is he to even begin? As Jack’s attempts to find answers stirs up a hornet’s nest of warring factions within the town, events soon start to spiral out of control . . .