The Missing President by Maxwell Blake 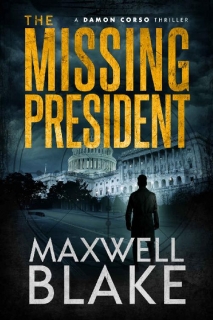 Crack FBI investigator and decorated war hero Damon Corso loves his country, but he has no love for the current President. Rumors of John Gamble’s corruption and ties to white supremacist organizations have left Damon, like many others, conflicted over his duties.

After a terrifying broad-daylight bombing leaves several Secret Service agents and even more civilians dead, the President goes missing. Evidence points at a terrorist act, and assorted Islamic extremist groups are fighting over who gets credit. But Damon, called on by the White House personally to conduct the investigation, suspects another culprit altogether–one significantly closer to home.

Somewhere in the White House is a weak link in the President’s security. If Damon can find this person, he can locate the group responsible for this mess–and thus, find Gamble. But who is it? A turncoat among the staff? The Vice President, who has just fallen into his dream job? Or someone even closer to Gamble?
The answers he finds will take him on a perilous journey into the dark heart of America and put him at the top of a powerful cult’s hit list.