The Mathematical Murder of Innocence by Michael Carter 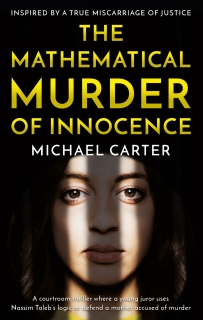 The Mathematical Murder of Innocence is a riveting courtroom drama inspired by a true story where a mother, having suffered two cot deaths, was wrongly accused of murdering her babies.
“What if I had been on the jury…?”
Things heat up in the courtroom when a juror is invited by the judge to cross-examine the expert witness, a professor who says the chances of cot deaths are only one in 72 million.

But, there’s more to this case than meets the eye… Readers must depict fact from fiction in this compelling venture into the inner workings of a courtroom.
Inspired by the teachings of Nassim Taleb, it is also an entertaining layman’s introduction to probability and the use and misuse of mathematical evidence in a court of law.