The Mage Queen by R. A. Dodson 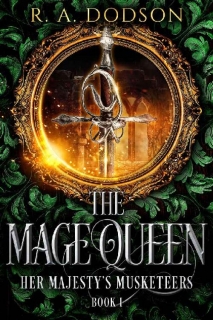 After five long years under the Curse, France lies in ruins.
Its only hope—a deposed queen in hiding, hunted by her enemies.
* * *
The year is 1631. Charles d’Artagnan flees the ashes of his life in Gascony, seeking better opportunities in Paris. With his land seized by armed peasants and his family among the countless dead, he has nothing left to lose and little to gain beyond mere survival.
Magic—once a useful tool for those rare individuals who still possess it—has become a weapon of incomparable power and destructiveness employed by France’s bitter rival, Spain. With Louis XIII dead and a Spanish pretender seated on the throne, the country’s future appears bleak.

As one faceless refugee among many, d’Artagnan never expected to hold Europe’s destiny balanced in his hands. He certainly never expected to be welcomed into an elite guard protecting France’s one and only hope—a widowed queen wielding the same magic as her enemies.

But Anne of Austria’s power will be wasted unless d’Artagnan can help her stay one step ahead of the assassins nipping at her heels. Ultimately, he and his comrades must return her to the belly of the beast itself, confronting the very forces that have pushed France to the brink of destruction.
The Mage Queen can’t do it alone. But with the help of d’Artagnan and her loyal musketeers, France may still have a fighting chance.