The Lost Girls by Elle Gray 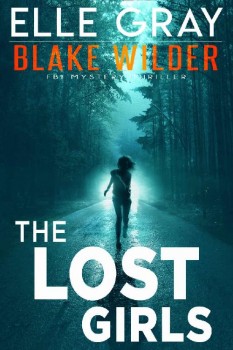 Whatever you do, don’t look back.
After learning the shocking truth behind the man she fell for, Blake feels lost at sea.
She feels adrift. And is punishing herself for not realizing who Mark was or his true motive by her side.
While trying to solve the secrets of her own personal life, FBI Agent Blake Wilder and her team are forced into action by Congresswoman Kathryn Hedlund, a woman who is the opposite of Blake in nearly every way.
Blake is appalled by the woman but is given no choice except to help find her daughter, who has gone missing.

Blake believes the spoiled rich girl is off on her own volition. But as the team starts digging into the disappearance, they start to uncover clues that suggest Hedlund’s daughter did not leave on her own. The team begins to realize that something far more sinister is occurring.
Their case takes them on a twisted ride that seems intent on giving the team whiplash. Just when they think they have a handle on things, it changes again, leaving them grasping for straws as they try to make sense of it all.

In her own personal life, Blake is coming under serious attack, when she suddenly suffers a loss that rocks her entire world. But as she copes with her grief, she gets the biggest surprise of her life…
They’re coming. Run. Run as fast