The Little Grave by Carolyn Arnold 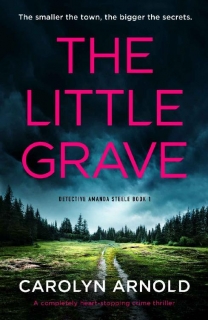 Detective Amanda Steele stops just inside the doorway, recognizing the victim’s face instantly. He seems so vulnerable in death; soft, human, even harmless. But she can never forget the evil he has inflicted. Her heart is hammering as she remembers her precious daughter, with her red curls and infectious laugh, and how she was lowered into that little grave…

It’s been five years since Detective Amanda Steele’s life was derailed in the path of an oncoming drunk driver. The small community of Dumfries, Virginia, may have moved on from the tragic deaths of her husband and daughter, but Amanda cannot. When the driver who killed her family is found murdered in a motel room, she can’t keep away from the case.

Fighting her sergeant to be allowed to work an investigation with such a personal connection to her, Amanda is in a race to prove that she can uncover the truth. But the more she digs into the past of the man who destroyed her future, the more shocking discoveries she makes. And when Amanda finds the link between a silver bracelet in his possession and the brutal unsolved murder of a young exotic dancer, she realizes she’s caught up in something darker than she ever imagined and suspects that more girls could be in danger.

But as Amanda edges toward the truth, she gets closer to a secret as personal as it is deadly. Amanda has stumbled upon a dangerous killer, and she must face some terrible truths in order to catch this killer – and save his next victim as she couldn’t save her own daughter…