The Lies We Hide by S.E. Lynes 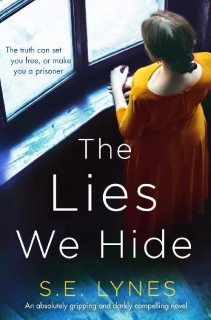 The truth can set you free, or make you a prisoner…
Thirty years ago, Nicola Watson lived with her parents and older brother in a respectable suburb. At ten years old, she didn’t yet understand why her stomach tightened when she heard her father’s heavy tread as he returned home late at night, or why it made her brother Graham’s stammer get worse, or why one night her mother Carol woke them both, wide-eyed and whispering, and took them out of their home and into the unknown.

Now a successful lawyer in the city, with a life poles apart from her dark beginnings, Nicola has returned home for her mother’s funeral. But as she stands in her mother’s house, remembering the woman who sacrificed everything for her children, Nicola has to confront the guilt that she feels for leaving her family behind. And the belief that she played a part in the events that led to her brother going to prison for murder.
All Carol wanted was to protect her children, but escaping her husband was only the beginning of the story. And when Nicola learns the truth of what her mother did, it will change everything she thought she knew about herself and her family.