The Latch Man by John Dean 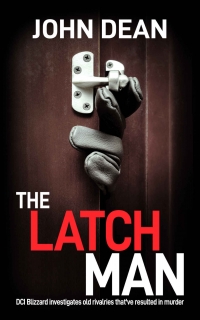 No one sees him come or go, but they all know he’s been.
Doris Hornsby, the bed-bound matriarch of a notorious criminal family, calls in the police after she sees an intruder in her room. DCI Blizzard attends in person, bemused that a woman who has spent her life evading the law, now seeks its protection.
Meeting the tough old bird, he senses a genuine fear. But if suspicions that the unwelcome guest was the infamous Latch Man are true, that fear should be allayed. A ‘gentleman thief’, he has never harmed a soul.

But when the woman is later found to have died, DCI John Blizzard senses something is afoot. Dismissing the doctor’s summary conclusion of natural causes, he determines to investigate further.

What he discovers will shake the community to its core, scaring criminals and law-abiding folk alike. If it is true The Latch Man has returned, that is only part of the puzzle.
Rivalries that have been simmering for years have come to the fore, and Blizzard must stop the case from snowballing into further tragedy. Can Blizzard discover The Latch Man’s identity, and can he collar him for the crime?