The Last Word by David Menon 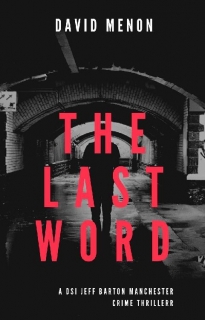 ‘Vengeance is mine’ said the killer.
Just when you thought you’d got away with it … a serial killer emerges from the confines of the dark web and delivers their own form of brutal justice.
But who can blame them?
These are not good people the killer is dispatching into the next world.

DSI Jeff Barton and his team investigate but are frustrated by the lack of useful leads. The more they find out about the families of the victims the more complicated the case becomes. Everybody is known to somebody. Everybody has been turning a blind eye to the suffering of others at the hands of evil perpetrators. And nobody appears to be telling anything like the truth.

Barton also has to contend with a new Chief Superintendent who seems intent on undermining him and a new DC on his team who’s making a little too much effort to get on with her new colleagues.
As the body count rises but still without any leads, Barton fears the trail will go cold. Then a connection to a previous case produces a jaw dropping twist at the end and leaves those surrounding the killer in shock.