The Last Scoop by R.G. Belsky 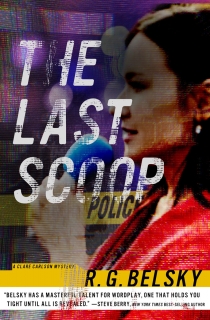 The scariest kind of serial killer—one you don’t know exists
Martin Barlow was Clare Carlson’s first newspaper editor, a beloved mentor who inspired her career as a journalist. But, since retiring from his newspaper job, he had become a kind of pathetic figure—railing on about conspiracies, cover-ups, and other imaginary stories he was still working on. Clare had been too busy with her own career to pay much attention to him.

When Martin Barlow is killed on the street one night during an apparent mugging attempt gone bad, it seems like he was just an old man whose time had come.

But Clare—initially out of a sense of guilt for ignoring her old friend and then because of her own journalistic instincts—begins looking into his last story idea. As she digs deeper and deeper into his secret files, she uncovers shocking evidence of a serial killer worse than Son of Sam, Ted Bundy, or any of the other infamous names in history.
This really is the biggest story of Martin Barlow’s career—and Clare’s, too—as she uncovers the path leading to the decades-long killer of at least twenty young women. All is not as it seems during Clare’s relentless search for this serial killer. Is she setting herself up to be his next victim?