The Last Hurrah by Emmy Ellis 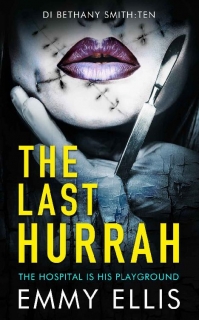 DI Bethany Smith has had enough. A man, dubbed The Creep, has been phoning her, saying he’s got bodies for her to find beneath the rubble. He’s been hounding her for months, and her nerves are shot. Especially when he brings DS Mike Wilkins into it, hinting her partner is in danger.
The Creep is a confused soul, forced to kill by Simon, a man who had a terrible childhood. More often than not, Simon spent time in a locked cupboard, and the wallpaper in there means he expects The Creep to do a certain thing for him every time he abducts a woman.

What is The Little Hospital, and why is it so important to The Creep?
Why does Simon insist The Creep takes his medication?
Who are the ‘visitors’, and why do they insist on returning after The Creep has killed them?
Bethany has some other questions she needs to answer. Can she continue in her job now she’s been targeted as The Creep’s plaything? Where are the bodies, and why is one of them in the canal?
And finally, is this case the last hurrah?