The Last Beekeeper by Jared Gulian 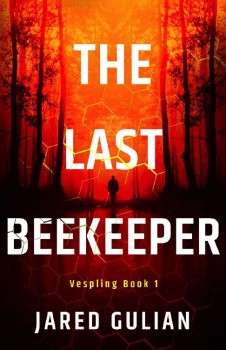 Sometimes your safe place… is not.
When murder strikes a remote community, a reclusive beekeeper uncovers a horrifying secret that could destroy humanity.
Jim Parker, a honeybee expert, has retreated to a quaint island in Lake Michigan with his teenage daughter after a terrible family tragedy. He longs to hide from an increasingly dangerous world.

In the midst of a Global Bee Crisis, bees everywhere are dying and the food supply teeters on the brink of collapse. Pollination now relies on powerful mega-corporations known as Beelords.
But this island is not the haven Jim once thought.

Someone is torching his traditional beehives, people are disappearing, and an unknown threat is lurking in the woods behind his house.
When he finds something very peculiar in his remaining hives, he begins to unravel a mystery that is deeper, darker and more complex than he ever imagined.
Now he’s not only fighting for the survival of his family, but for the very future of humankind.