The Knight’s Blade by RG Long 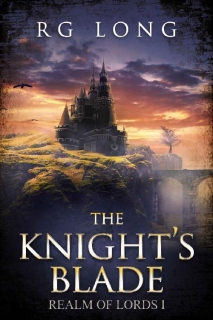 One theft will set the realm ablaze.
Rosha is a stablehand in training for a prince of Grannitewatch. Darrion is a bastard orphan in the care of his abusive aunt. Both long for an opportunity to prove that they are meant for more than a life of poverty in the quiet city of Oldrum.
When the prince’s family heirloom is stolen from under his nose, Rosha and Darrion are given just that chance.

But when they find themselves up against bandits who have no qualms about killing two adventurous youths, they’ll need to join forces with a wizard who hides a secret that could cost them more than their future plans of glory.
A growing evil makes its presence known. A prisoner offers an unwelcome hand. An adventure begins that may throw the entire realm into chaos. And Rosha and Darrion must choose what the price of fate will cost them.