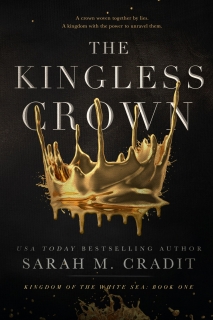 A crown woven together by lies.
A kingdom with the power to unravel them.
Four Reaches. Four brides. Only a fortnight separates the young women from becoming reluctant queens of the usurper king, Eoghan Rhiagain.
Twenty years earlier, King Eoghan’s father cunningly devised marriages between the highborn sons and daughters of the oft-warring Reaches, sealing the unions before they could protest, shattering existing betrothals in place of forced alliances.

Now, Eoghan, the cruel boy king who stole his crown through murder, demands the eldest daughters of these unions. To accept is unfathomable. To refuse is treason.
The lords and ladies of the kingdom have no choice but to prepare their beloved daughters for the horrors ahead. But they’ll soon discover there are no longer any daughters left to present. All four have disappeared, painting the world with their rebellion.

Theirs is not the only rebellion. Across the kingdom, little fires light within. From the enigmatic sorcerers in the northern mountains, to the magi who both wield and regulate the kingdom’s magic, and beyond… to a place where two prisoners are not what they seem.

As the Reaches ready themselves to face the king, the kingdom hovers on the edge of chaos.
And there are many who recall, in candlelit secrecy, tales of a time before…