The Killing Moon by Dan Padavona 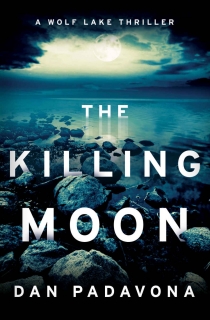 The night holds dangerous secrets. And a girl who cried wolf is caught in a murderer’s crosshairs.
Only twelve hours have passed since Violet saw her teenage boyfriend. Now his body lies in the morgue, riddled with stab wounds. And the evidence points to a mythical serial killer Violet invented to scare her friends…The Halloween Man.

Sheriff Thomas Shepherd is torn between two investigations after a deadly inmate escapes prison and stalks Wolf Lake. How can he defend his loved ones while a murderer runs loose?

Desperate to catch the killer, Thomas pursues Violet and her friends. But as he wades into the investigation, the suspect list grows.

Is a madman copying scenes from a horror movie on Halloween? Or is Violet hiding a deadly secret?