The Key In The Vase by Autumn Barlow 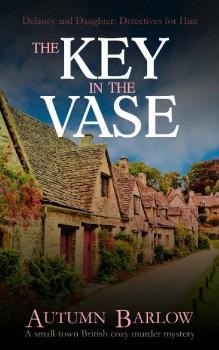 Widowed in the Great War, Polly is struggling to make ends meet. When a local farmer is found dead in strange circumstances, Polly is persuaded to make contact with her estranged mother, Dora.
Dora was once one half of a famous detective duo. Now she’s alone, except for half a dozen rescued dogs and her own bitter secrets. But she agrees to come back to the small town and look into the farmer’s death. She’s haughty, confident and witty, and ferociously intelligent. Next to the glorious Dora, Polly feels every inch a dowdy single mother.

Soon the murderer knows they’re under investigation and things turn into a dangerous game of cat and mouse. They start to unravel the clues and get closer to the killer. Polly’s warmth and local connections are just as important as Dora’s detective knowledge – as long as they can both surmount their own differences and work together.

And they can’t do that until Dora confesses the secret and surprising betrayal that has been at the heart of the family since Polly was born.