The Justice in Revenge by Ryan Van Loan 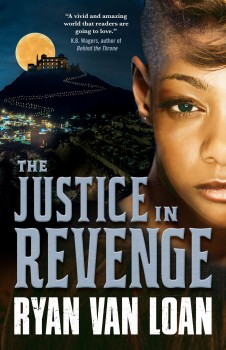 The island nation of Servenza is a land of flint and steel, sail and gearwork, of gods both Dead and sleeping. It is a society where the wealthy few rule the impoverished many.

Determined to change that, former street-rat Buc, along with Eld, the ex-soldier who has been her partner in crime-solving, have claimed seats on the board of the powerful Kanados Trading Company. Buc plans to destroy the nobility from within—which is much harder than she expected.

Stymied by boardroom politics and dodging mages at every turn, Buc and Eld find a potential patron in the Doga, ruler of Servenza. The deal: by the night of the Masquerade, unmask whoever has been attempting to assassinate the Doga, thereby earning her support in the halls of power. Blow the deadline and she’ll have them deported to opposite ends of the world.

Armed with Eld’s razor-sharp sword and Buc’s even sharper intellect, the dynamic duo hit the streets just as the shadow religious conflict between the Gods begins to break into open warfare. Those closest to Buc and Eld begin turning up with their throats slit amid rumors that a hidden mastermind is behind everything that’s going wrong in Servenza.

Facing wrathful gods, hostile nobles, and a secret enemy bent on revenge, Buc and Eld will need every trick in their arsenal to survive. Luckily, extra blades aren’t the only things Buc has hidden up her sleeves.