The Jade Egg by D.K. Holmberg 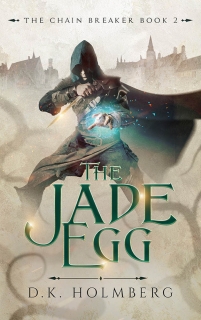 A dark sorcerer with a deadly plan attacks Gavin’s adopted city. The Chain Breaker Series continues.
After capturing the sorcerer called the Apostle, Gavin decided to remain in the city of Yoran where he’s become comfortable. Work that had been plentiful has dried up and comfort becomes complacency.
While new friends help to find jobs, they’re not the kind of jobs an assassin trained to be the Chain Breaker should take. He’s trained to kill, not track down relics in a city that long ago banished magic.

When pushed to save a young boy, Gavin finds himself dealing with much more than he bargained for. A sorcerer known as the Mistress of Vines has come to Yoran. In order to stop her, he must come to understand a part of himself he was trained to ignore.
It will take an assassin without equal to stop the Mistress of Vines.
Only this time, the Chain Breaker might not be enough.