The Iron Dirge by Sam Sykes 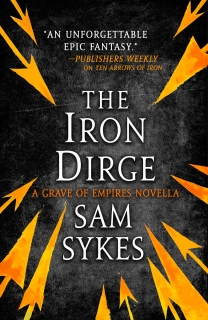 Sal the Cacophony does not make friends. When you have a magic gun, a trusty blade and rogue mages to hunt, you don’t need them. Sal the Cacophony makes enemies. And when her hunt leads to a town on the edge of nowhere, she finds them in spades: an unassuming mage with a secret, a vengeful bandit queen with ideals and steel to spare, and a colossal, centuries-old beast who has decided now is the best time to migrate.

Sal the Cacophony could be their savior. But as everyone eventually learns, Sal’s “salvation” is usually worse.