The Innocent Dead by Lin Anderson 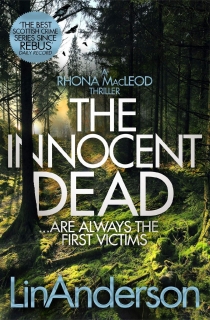 The Innocent Dead is a gripping crime novel by Lin Anderson featuring forensic scientist Rhona MacLeod who must solve the case of a young girl who went missing forty-five years ago.
Mary McIntyre’s disappearance tore the local community apart, inflicting wounds that still prove raw for those who knew her.
The present day discovery of a child’s remains in a peat bog south of Glasgow looks to finally solve the decades old mystery of ten year old Mary McInally’s disappearance.

Karen Marshall had been devastated by her best pal’s abduction on the day of her confirmation.
Questioned by the police but traumatised by the loss of her friend, nothing Karen remembered back then had helped.
Now decades later, the news of the possible discovery of Mary’s body brings the nightmares back, but added to that are returning memories long buried by Karen.

Memories that begin to reveal her role in her friend’s disappearance and perhaps the identity of the killer.
Are these memories the truth or just a figment of an aging brain?

Called in to excavate the body on the moor, forensic scientist Rhona MacLeod uses the advances made in forensic science since Mary’s death, to unravel a horrific tale that encompasses more than just one child, and not only in the past.
The Innocent Dead moves between the past and the present.
Those who sought and hid the truth back then and those intent on discovering it now.
But can this be done before the killer puts his next plan into operation?