The Initiate by James L. Cambias 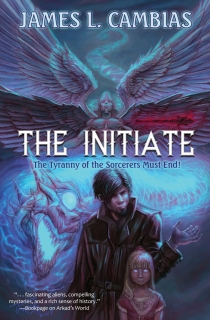 A SECRET ORDER OF SORCERERS RULES THE WORLD. ONE MAN HAS VOWED TO DESTROY THEM.
It’s their world. He’s going to take it away from them.
The Apkallu are masters of magic. Theirs is a secret tradition stretching back to the dawn of civilization. They rule the world from the shadows, using mind control and deadly monsters to eliminate any threat to their power. If they know your name, or have a trace of your blood, you can never defy them.

Sam Arquero lost his family to a demon, and knew that nobody would believe the truth. An old man named Lucas offers him the chance to find out who is responsible, and bring down the Apkallu forever. All he has to do is join them . . .

Under a new identity Sam learns the secrets of magic, infiltrates the Apkallu, and walks a razor’s edge as he picks off their leaders while avoiding supernatural detectives on his trail.
But Sam faces a greater threat: As he fights monsters, what is he becoming?