The Imprisoned by Paul Laane 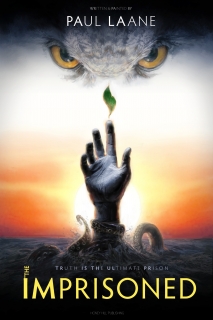 Imprisoned on a holiday island that holds a terrible secret. Doom approaching on the horizon. Can he escape before it’s too late?

Devoid of memories, a man wakes up imprisoned in a cave, his only companion an owl with a one-handed clock chained around its neck. After an escape, the prisoner discovers he is on a strange island. On top of the cliffs a dark castle looms as the twilight shadows point him toward a village… He arrives a stranger in town, receiving the name Number 9. In the Village, everyone is numbered, all on an endless holiday, blissful to question why they cannot remember yesterday. Or why there is a strict curfew past sundown, beyond which no-one stays awake.

Trapped with mounting mysteries, Number 9 discovers he is running out of time. Something is coming on the Horizon, something that makes him panic. As the doom approaches and the one-handed clock ticks away, Number 9 will have to find a way to escape the ultimate prison. Or uncover the horrible truth behind it…