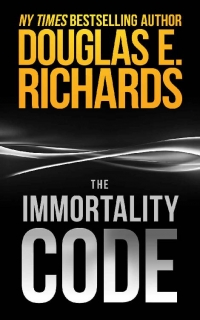 Allie Keane’s breakthrough in quantum computing holds the key to unlocking eternity. But can she survive long enough to use it?

When Allie Keane makes a revolutionary discovery in quantum computing, she kicks the ultimate hornets’ nest. She doesn’t know it, but a hidden battle for tech supremacy is raging around the world, and whoever controls her discovery will dominate the globe. Soon, Allie is being hunted by ruthless forces desperate to learn her secret, and only Zachary Reed, a gifted operative within a shadowy government agency, stands in the way.

But as extraordinary as Allie’s breakthrough is, it holds the key to unleashing something far bigger. An unrelated technology thousands of years beyond current science. A staggering advance capable of bringing about a utopia, rewriting the laws of life and death, and helping humanity spread throughout the stars.
As long as it doesn’t wipe out all life on Earth before that can happen . . .