The House Guests by Emilie Richards 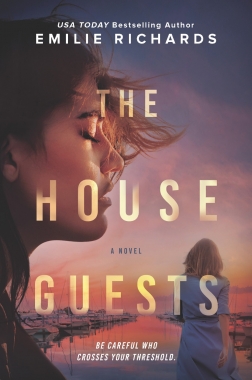 In the wake of her husband’s sudden death, Cassie Costas finds her relationship with her teenage stepdaughter unraveling. After their move to historic Tarpon Springs, Florida, Savannah hates her new town, her school and most of all her stepmom, whom she blames for her father’s death. Cassie has enough to contend with as she searches for answers about the man she shared a life with, including why all their savings have disappeared.

When Savannah’s rebellion culminates in an act that leaves single mother Amber Blair and her sixteen-year-old son homeless, Cassie empathizes with the woman’s predicament and invites the strangers to move in. As their lives intertwine, Cassie realizes that Amber is hiding something. She’s evasive about her past, but the fear in her eyes tells a darker story. Cassie wonders what the woman living under her roof is running from… and what will happen if it finally catches up to her.