The Hiding Place by Helen Phifer 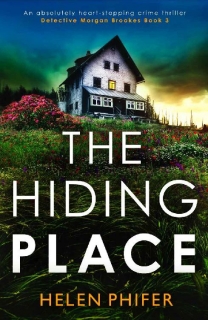 The little girl peered down the dark alleyway. She wasn’t supposed to take this shortcut and if her mother found out she’d kill her, but it was raining and all she wanted was to get home quickly. She stepped forward, not seeing the silent figure following her into the dark passageway…

When nine-year-old Charlotte Standish goes missing from her street in the small town of Rydale Falls, it sparks a media frenzy. Detective Morgan Brookes leads a frantic hunt for the girl, but little Charlie seems to have vanished into thin air.

Chasing up a lead at Charlie’s school, Morgan is chilled to learn that this isn’t the first time a child has gone missing on this street. Another girl disappeared fifteen years ago, and Morgan is the only one who thinks the cases could be related. But in the moment that she takes her eye off Charlie’s case to investigate the link between the two girls, another child, Macy, goes missing.

Then Morgan gets the call she was dreading, Charlie’s lifeless body has been found in a local park, lying in the shadow of a large tree. Morgan has let one girl down, but she refuses to give up on Macy. Determined to find an overlooked clue, she retraces Macy’s last steps. She’s getting close to the truth when her partner, Detective Ben Matthews, is attacked outside Morgan’s home. Is a twisted killer isolating Morgan from her team? And how long does Macy have left to live? Morgan must solve the case before more innocent lives are taken…