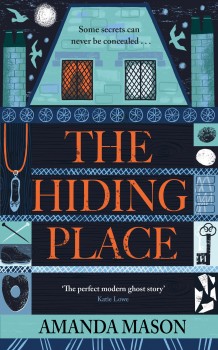 Some secrets can never be concealed . . .

Nell Galilee, her husband and twelve year old step-daughter Maude rent a holiday cottage by the sea, needing time and space away from home. Nell grew up in this small, wind-blown town and has mixed feelings about returning, and it isn’t long before she is recognised by a neighbour, seemingly desperate to befriend her. The cottage has been empty for some time, and from the start Nell feels uncomfortable there. Something isn’t quite right about this place . . .

Maude, furious about being brought here against her will, soon finds herself beguiled by the house’s strange atmosphere. There are peculiar marks in the roof beams above her bedroom, and in another room, a hiding place, concealing a strange, unnerving object.

As the house gradually reveals its secrets, Nell becomes increasingly uneasy – and Maude spellbound. But these women – and the women that surround them – are harbouring their own secrets too, and soon events will come to a terrible head . . .

A brilliant, unsettling and chilling novel of mothers and daughters, truth and deception and the lengths people will go to, to obtain power over their own lives, The Hiding Place is the second chilling novel from the acclaimed author of The Wayward Girls.

The Wall by Ted Takashima

An Easy Job by Carrie Vaughn

The Mother Next Door by Tara Laskowski