The Hidden Vector by Mathew Snyder 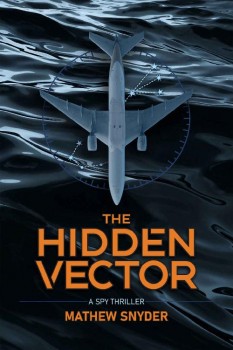 CONFRONTING THE ENEMY WITHIN

When a troubled virologist flees Russia with a manufactured virus, he hopes to bring his cure to the world. But terrorists hijack his flight and fake his death in a jetliner explosion over the Black Sea. Now, his captors want the bioweapon from his blood.
Enter Ethan Pierce, a sharp-eyed but over-confident targeting officer for the CIA. He investigates the hijackers. Within days, a fellow officer is dead because of his recklessness. And he gets close to another officer who isn’t what she seems.

Ethan matches wits against an enemy that sabotages the CIA from inside so it can unleash the deadly virus. As Ethan races to stop the conspiracy, he learns the terrorists’ first target is revenge for his efforts. They aim to kill his ex-wife, whom he still loves.
Paul Corso, Ethan’s trusted supervisor, discovers the conspiracy from inside CIA headquarters. Happily married, Paul learns the severe cost of confronting the conspirators when they threaten his family and discredit his CIA career.

Now each man faces an impossible choice: Stop a deadly catastrophe or lose the people they love most.