The Hidden Graveyard by Marc Layton 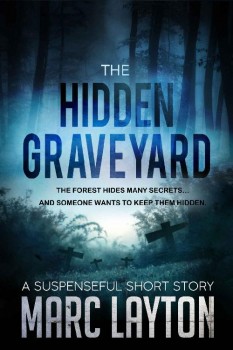 The forest hides many secrets… and someone wants to keep them hidden.
Twenty years after their parent’s tragic disappearance, brothers Damian and Liam are on the hunt for the truth. Traveling to the shadowy woodland where that fateful day occurred, nothing could have prepared them for what old forces they were about to stumble into.

Shrouded in mystery, the forest hides many dangers and has swallowed many souls. Determined to investigate the cause of their parents’ disappearance, Damian and Liam must sift through the stories and decide who they can trust… and who might be hiding something.

And after the pair attract the attention of an elusive enemy who haunts the dark and ominous woods, the brothers will need to use all of their wits if they want to uncover the truth and make it out alive…
Can Damian and Liam find out what happened to their parents all those years ago? Or will they become the forest’s next victims?