The Half Theft by Brooke Nelson 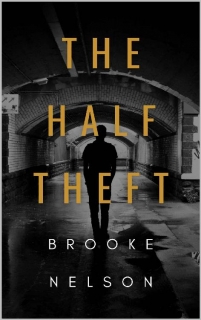 Charlie Riverson led a mundane life in the nearly abandoned city of Collinswood. Always had. Always would, at least that’s what he preferred to believe. It eased his mind far more than the truth of his life as of lately—the reality of the unexplainable crime attempted in his home, just three months after the disappearance of his best friend, and a possible link between the two.

The link? The Ducartes, the city’s most notorious family of homicidal madmen—and woman—who spent the majority of their time carrying out promises of revenge upon anyone who dared to disobey them. Most dangerous of all were the children, Grant and Naomi, the two who executed their father’s plans, no matter how gruesome.

Charlie now found himself at the intersection of a terrific and terrible realization. The good news: There was a chance, even if a small one, that Charlie might yet be able to rescue his friend. The bad news: The key to her whereabouts led him straight to the very family he wanted to distance himself from most.