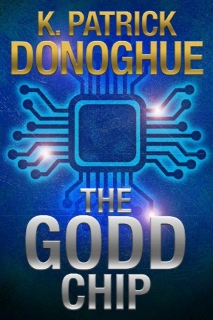 Dr. Takoda Wells and his allies risk everything to find the GODD Chip, a banned gene therapy that might just save the human race.
Set in the year 2137, this post-apocalyptic technothriller takes place amid the aftermath of the Genetic Revolution of the 2070s, an era during which the craze of designer babies and gene replacement therapies led to generations of horrible mutations and the eventual worldwide ban on DNA alterations.

Now, a new outbreak of mutations threatens to wreak even more havoc. Dubbed the Jakali Syndrome, the new mutations turn adolescents into insane, ravenous killers known as jakalis. The condition is a scourge the geneticist Takoda knows all too well. Jakalis killed his wife and his daughter is destined to become one of the beasts…unless he can find a cure before she transforms.

That search intensifies when Takoda discovers healed mutations in the DNA of a ten-year-old boy slated to be euthanized before he morphs into a jakali, repairs that suggest the boy was recently treated with the GODD chip, an experimental therapy banned twenty-five years prior.

Emboldened by the discovery, Takoda and his allies embark on a harrowing adventure to find the person responsible for treating the boy in the hopes of acquiring the GODD chip technology. But there are those who learn of the mission, factions who view the chip as a threat to the post-Genetic Revolution world order. And they will stop at nothing to foil the heretical quest.