The Girls in the Snow by Stacy Green 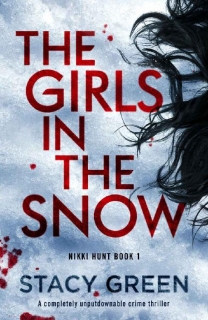 Madison walked through the fallen snow, looking left and right. It had been Kaylee’s idea to use the trail through the forest; she said no one would follow them. But Madison lost sight of Kaylee for a moment and when she found her again she wasn’t alone…
In the remote forests of Stillwater, Minnesota, you can scream for days and no one will hear you. So when the bodies of two fifteen-year-old girls are discovered frozen in the snow, Special Agent Nikki Hunt is sure the killer is local: someone knew where to hide the girls and thought they would never be found.

Though Nikki hasn’t been home in twenty years, she knows she must take over the case. The Sheriff’s department in Stillwater has already made a mistake by connecting the girls’ murders to those of a famous serial killer, refusing to consider the idea that the killer could be someone from town.

Then another girl’s body is found, a red silk ribbon tied in her hair, and Nikki realizes that the killer has a connection to her own dark past, and the reason she left Stillwater. Nikki is not the only person in town who wants those secrets to stay hidden. Will she be able to face her demons before another child is taken?
Gripping and spine-chilling, The Girls in the Snow will make you gasp, unable to put it down until the final heart-pounding twist. Perfect for fans of Karin Slaughter, Lisa Gardner and Robert Dugoni.