The Girl Who Wants by Amy Vansant 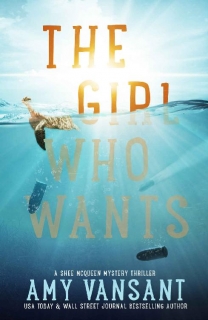 Shee wants a home.
Shee McQueen grew up skip tracing and hunting military criminals with her father, Mick, until someone put a bounty on her head, forcing her underground. Resurfacing years later, she returns to her family’s hotel in Jupiter Beach, FL, to find Mick in a coma, shot in the head by an unknown sniper.
Shee wants answers.

The Loggerhead Inn has everything Shee could want in a beach hotel—sea turtle wall art, a tiny Yorkshire terrier mascot who thinks she’s a pit bull, and her father’s staff of deadly, damaged military veterans, looking to redeem their troubled souls by helping others. Not to mention— Hold on…

How did Mason Connelly, the SEAL she fell for decades ago, just appear in the lobby? Why did he have to show up now demanding answers to secrets long buried?
Shee wants it all back.
But someone wants her dead.