The Ghost Pact by Ben Wolf 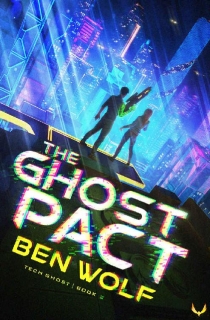 A scientist with a secret…
…a colonist ship under attack…
…and only one man can save them both.
After barely surviving the horrors in ACM mine 1134, Justin Barclay and his ghostly tagalong board a colonist ship bound for a new world. As they explore the futuristic colonist city within the ship, they quickly realize all is not as it seems.
The arrival of Dr. Hallie Hayes, a fugitive scientist, arrives on the colonist ship shortly after. Her charge: get her life’s work to the core Coalition planets before it falls into the wrong hands.

But she’s too late.
Her pursuers have tracked her to the colonist ship…
…and they’ve brought a literal army with them.
Lovestruck and eager to strike at Hallie’s enemies for his own personal reasons, Justin fights to preserve her secret and stop her pursuers once and for all.
Can Justin save Hallie before the enemy captures her and seizes her life’s work? Or will his intervention unleash an even greater calamity in the process?